SUM OF THE DAYS BEEN AWAY 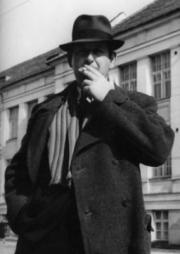 A musical documentary about internationally known Estonian symphonist Eduard Tubin (1905 Tallinn - 1983 Stockholm) who stayed during the most important period of his life abroad, in a closed circle of emigrants.

This film is about a powerful creative person, who despite of the twists of the destiny wrote ten symphonies and became quite complicated symbol to a small nation.