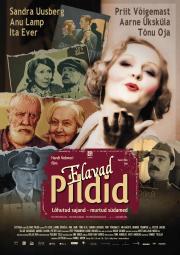 Helmi, is born into the house of Baron von Strandmann in Old-Town Tallinn, in 1908. The only thing that she knows for sure about her past is that her mother was an Estonian servant girl. Everything else is a discovery during a life that runs the course of a century – a life that has quite a lot of surprises in store for Helmi.

In this house she finds happiness and suffering, passion and disappointment. She grows up alongside young Erik and waits for her big love to blossom. But one floor down lives projectionist Julius – a man who is far from indifferent when it comes to Helmi. All of the biggest historical events of the century leave their mark on the house. Its hardwood floors have born soldiers’ gruff boots and gentleman’s shiny oxfords. Its walls have held the fates of people from far and near, foreigners and locals. Helmi’s home becomes a German salon, a revolution museum, and a working class commune. And as freedom comes, real estate crooks start sniffing around the place. The only things that remain unchanged in these turbulent times are the cinema hall projecting living images on the screen and Julius’s quiet love for Helmi.

Director Hardi Volmer’s historical love story combines the grotesque of early silent films with the melodrama of the golden age of cinema with elements of both the epic and the comic.